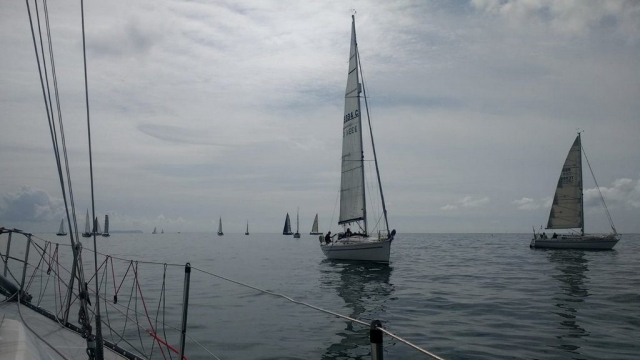 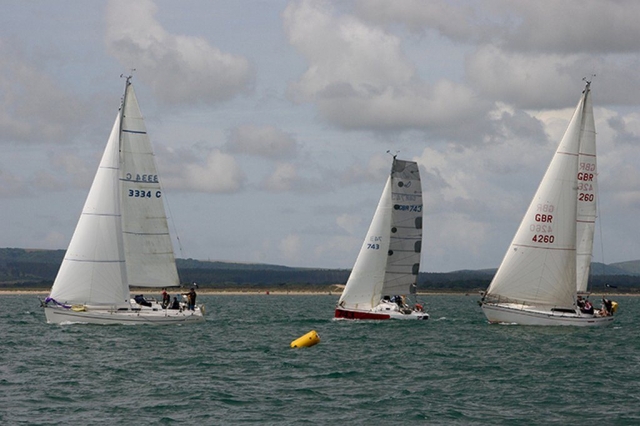 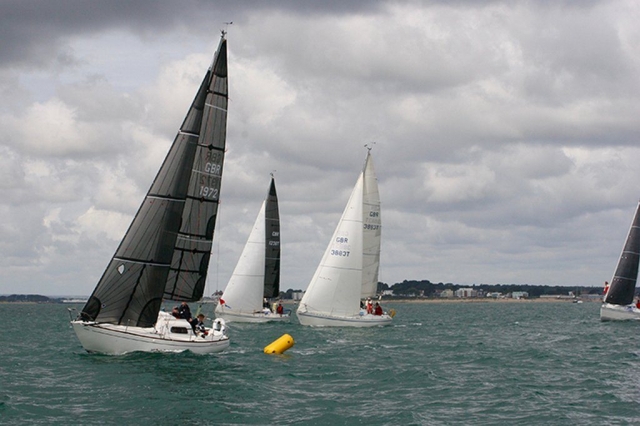 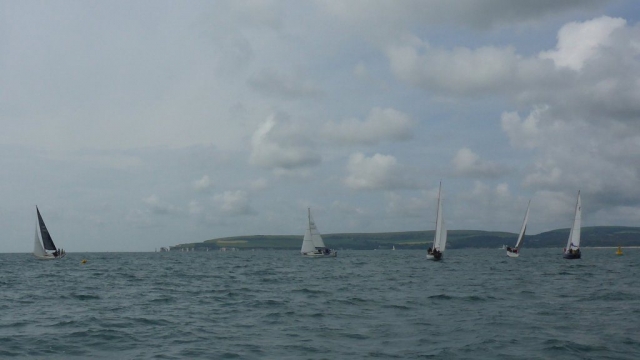 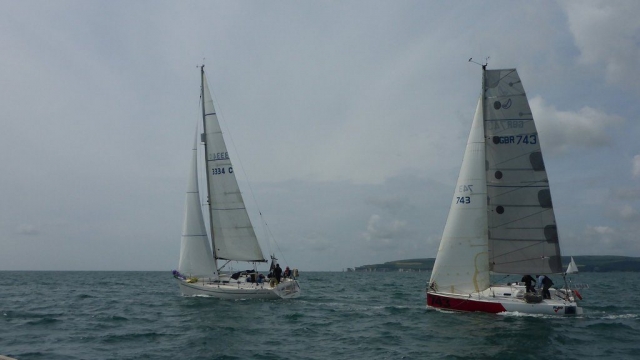 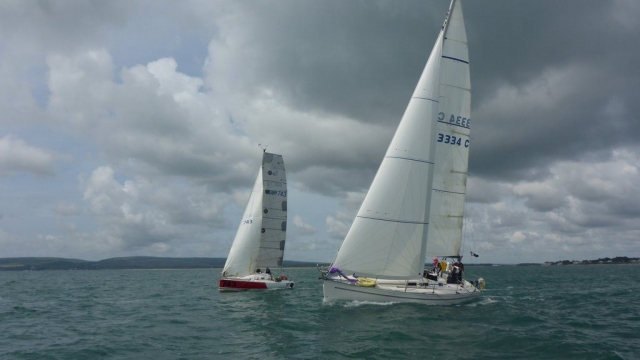 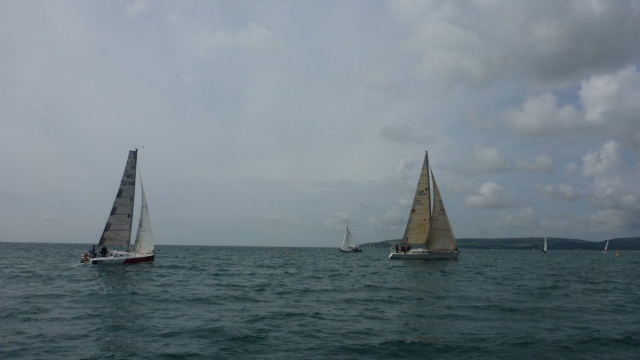 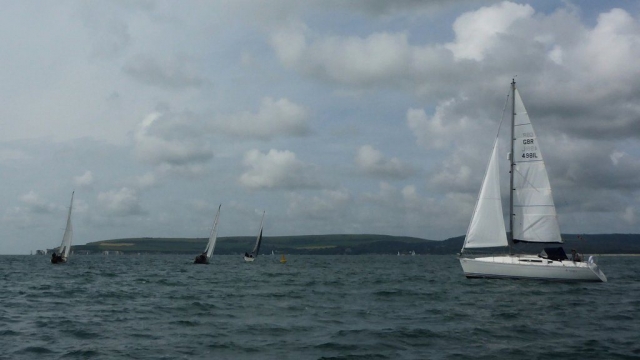 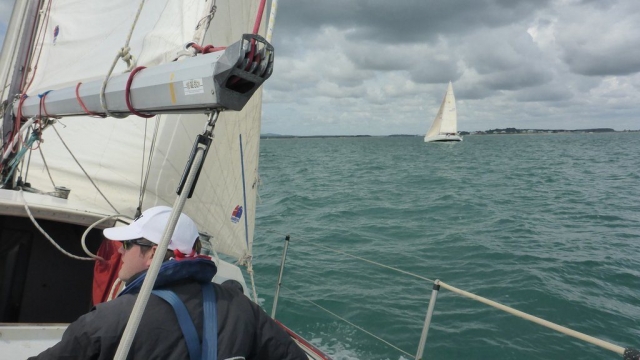 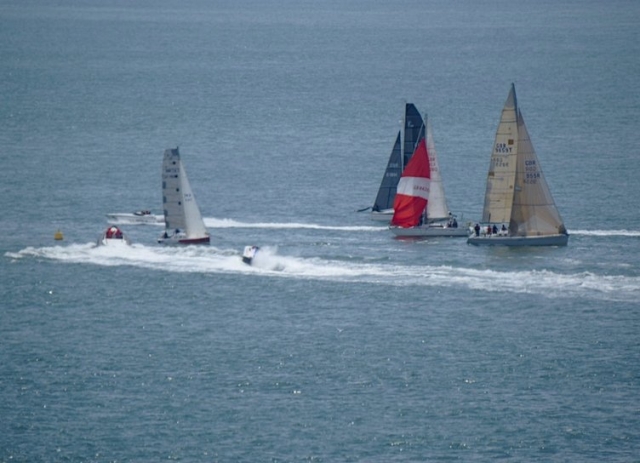 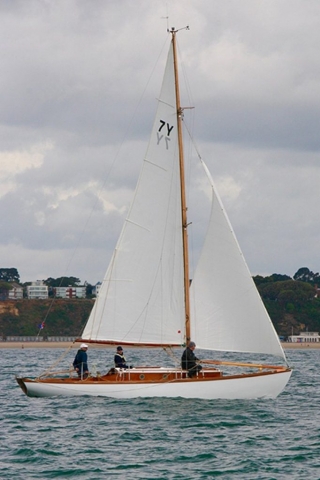 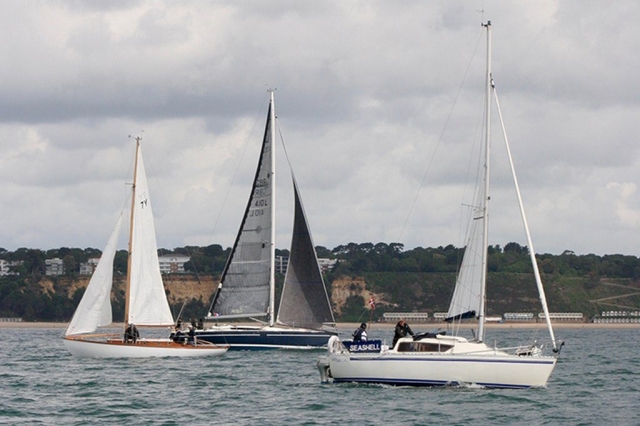 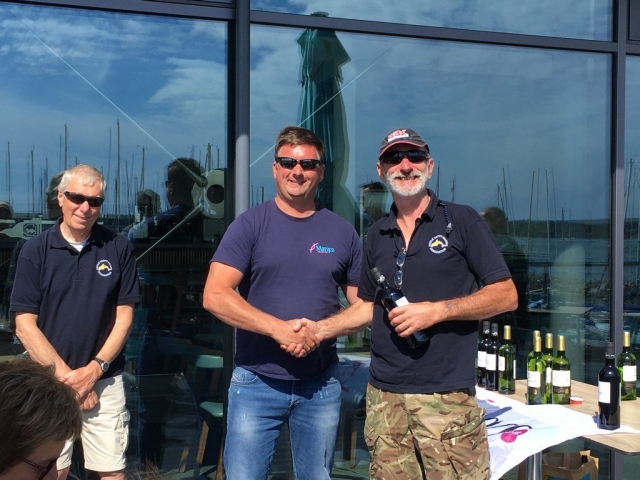 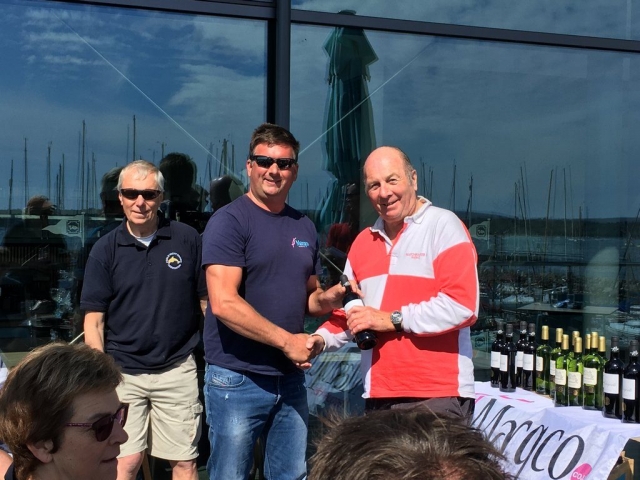 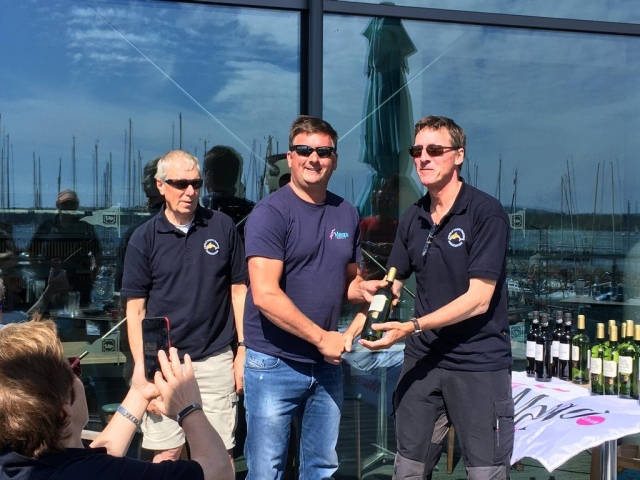 With a Poole Yacht Racing Association Race from Poole to Lymington cancelled on Saturday, with 35 knots plus forecast, Pooles PYRA fleet made their way into the Bay for a replacement two races on Sunday 9th June.

Divided into four fleets, competitors were met with mirror like condition and a complete reverse of the previous day.
With a challenging coastal course in mind, race officers Dave and Di Broadbent wisely hoisted the AP.
With only a short wait however a consistent SW 7 – 10 knots appeared, coupled with sunshine to get boats under way.
A combined start for class three and four and windward leg to MS Amlin race mark, saw two MGC27s Athene and Mojito jockeying with the Ecume de Mer QT in class three. Athene was to round first before a long run across Poole Bay to Southbourne. The smaller QT was able to close the door on Mojito rounding second. With these two boats continuing their dual but Athene had stretched far enough ahead to win the first race, QT holding Mojito to secure second followed in by the beautiful 1946 C&N 30 Ampere.
Class 4 was dominated by the Elizabethan 29 Skykomish followed home by the Gibsea 242 Seashell.

The larger classes One and Two having followed the same windward leg raced on to Hengitsbury Head with the Elan 410 Esprit leading the way in Class One and Contention 33 Matchmaker in Class Two.
For the long upwind haul back to the Pooles Swash channel, it was again Esprit in front in Class One followed by the Pogo 2 Shed of Arjuna racing two handed, Poole Sailing Addiction a Beneteau First 40.7 picking up the third slot.

Class Two saw a reverse of results in the second race with Elan 333 Pluto taking the win over the Contention Matchmaker.
Likewise QT able to show their upwind boat speed was able to stay close enough to Athene to win. Mojito again third and Ampere followed by the events sponsors from Marqco Marquees racing the MG Spring 25 Genesis.

A repeat of the earlier race in Class Four saw Skykomish wining over Seashell.

Excellent racing in superb conditions all under the watchful eye the race officer Dave Broadbent in his trimaran Smithy ended with a prize giving and renowned PYRA rendezvous on the sun drenched veranda of Parkstone Yacht Club, thanks to both John Short from Sponsors; Marqco and event organiser Peter Biggs.

From the deck of Matchmaker

Due to the bad weather forecast for Saturday the Lymington weekend was aborted in favour of a Bay race on Sunday.

Three crew from Matchmaker made an early start in order to bring Matchmaker in to Parkstone from the Wych channel. When we arrived at Parkstone there was blue sky, no wind, and water like a mirror! Picturesque but not much good for sailing.

We brought in Matchmaker and picked the crew up and motored out into the Bay, by which time it had clouded up, but there was still no wind. For a short while the wind picked up to 10 – 11 kn but then died, the wind was playing with us. Smithy our start boat tried to get us away at 10:00 hours in a light breeze but it died so the a AP flag was hoisted and we waited for wind. A sea breeze then filled in from the S/SW enabling the first Fleet to start at 1050.

The course for classes 3 and 4 was MS Amlin, then to Boscombe Outfall which was the self timing finish line for the first race, the 2nd race was to continue from Boscombe Outfall back to the Swash finish line. One of the class 3 boats underestimated the tide at MS Amlin and had a severe problem rounding it!

It was very busy at Hengistbury Head Buoy! We were dropping the spinnaker, letting out the genoa, preparing to take our time as the buoy was due North of us, and then starting the beat back to the Swash finish line, and at the same time had powerful speedboats coming towards us and rounding/passing the same mark!

The wind held for the whole of the race and in fact we enjoyed a very pleasant race jostling with Pluto.

Back ashore we enjoyed relaxing on the balcony at Parkstone YC with a drink supplied by our sponsor, Marqco Marquees, and chatting with our crew and other competitors.