11 PYRA yachts ranging from the JPK 1010 ‘Joy’ to the Elizabethan 29 ‘Skykomish’ made their way out into Poole Bay, early on Saturday 15th May, in bright sunshine and what at least felt like a light, but rapidly increasing breeze as had been forecast. Threatening dark clouds hung over the Purbecks and talk on board most boats centered on whether to consider a reef, with just two on board.

On reaching the RMYC Committee Boat anchored close to East Hook, race officer John Chilvers was soon to broadcast the course for the first of three planed races, but as he did, the wind slowly dropped. With 10 minutes of the planned starting time of 10:10 am, what little wind there was had dropped to nothing and no choice but to signal an AP.

Menacing weather continued to track across the Purbecks, heavy rain could be seen falling on Bournemouth, the Bay alas remained windless.

With weather plotters running on the Committee Boat, revealed pressure tracking in from the West and the call made to motor East to provide a windward leg if and when it did arrive.

A new start line laid at Jenkins Marine, slowly the wind began to build and a new course set for a 12:00 pm start.

What at least looked like a very one-sided beat, favored the Committee Boat and it was the MG 346 ‘Haven KJ Enigma’ winning the favoured spot on the gun with the entire fleet below and behind.

4 Boats broke away from the following pack, along with ‘Haven KJ Enigma’, ‘Joy’, the Elan 333 ‘Energy’ and Impala ‘Firebird’ in close pursuit. Rounding Stoneways Marine and returning on a windward / leeward course gybes were quickly called as a 45-degree wind shift moved its way across the Bay.

The same shift hit the remainder of the fleet still beating towards Stoneways Marine, turning what had been a slightly one-sided leg into a true beat into the turning mark. The Race Officer had obviously been very well informed.

With a growing breeze an increasingly exciting spinnaker leg brought the fleet back to Jenkins, ‘Joy’ finishing just three seconds ahead of ‘Haven KJ Enigma’ but the MG346 ultimately beating ‘Firebird’ by just one second on corrected time pushing the JPK back into third place.

The Elan ‘Energy’ picking up fourth and ‘Shebeen’ and ‘QT’ then finishing within 7 seconds of each other.

Following the lengthy earlier AP the wise decision was made to reduce to just two races and a course set for race two, to finish in the Swash Channel. The wind was now exceeding the forecasts with gusts up to 25 knots. Many boats made the decision to reef.

With the direction of the wind having swung it was now the outer distance mark that favoured the 13:00 start. The little Ecume de Mer ‘QT’ won the windward end slot and ‘Joy’ breaking away to leeward.

The fleet remained close to Stoneways Marine then began to spread on a reach out to the Magnum race mark, with ‘Joy’ leading. A second beat in both growing wind and waves, suited the Dehler 36  ‘Ceres’ racing in class four but holding onto the Class One boats just ahead.

Turning at Bar Bouy, a blistering reach down the Swash, with gusts occasional hitting 30 knots followed, to finish between No’s 7 and 8, ready to make a quick return to the Harbour.

‘Joy’ finishing 4 minutes ahead of ‘Elevation’ 2nd on the water but knocked back to 4th on corrected time.

For the class three boats a repeat of the earlier race saw ‘QT’ and ‘Shebeen’ finishing literally alongside, both reaching flat out, so close that the Race Officer could not sperate their finishing times.

Other Class 4 boats included the GibSea 242  ‘Seashell’ and ‘Skykomish’ both having to battle in the increasingly challenging conditions but racing to the end and finishing within 38 seconds or each other.

John Chilvers and Roger Coates, did a great job, producing two excellent and competitively fought races from the front to the back of the fleet.

A day which certainly threw every type of weather at those racing.

Class winners will be awarded at the annual RMYC end of season prize giving on Thursday 4th November 2021. 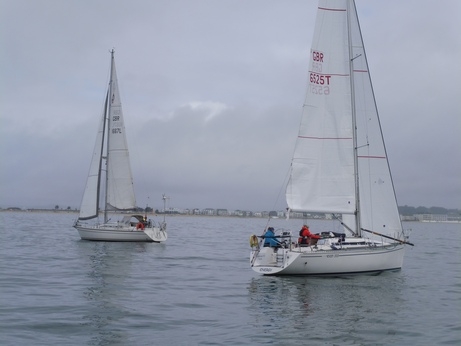 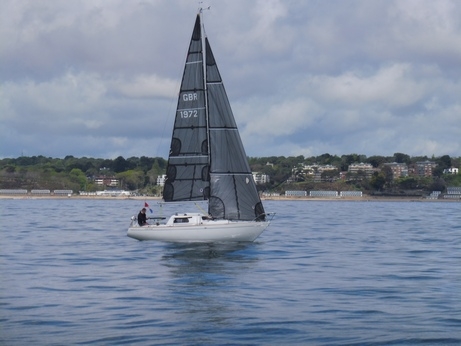 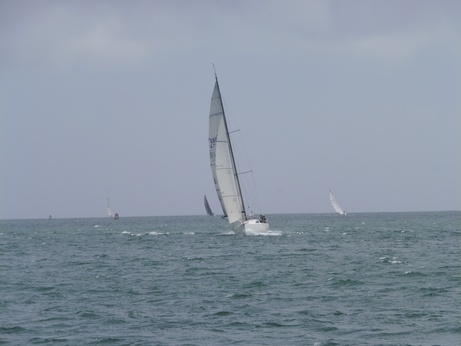 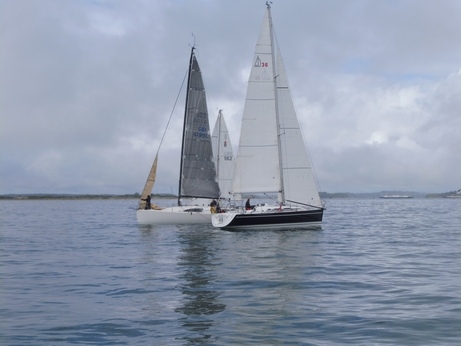 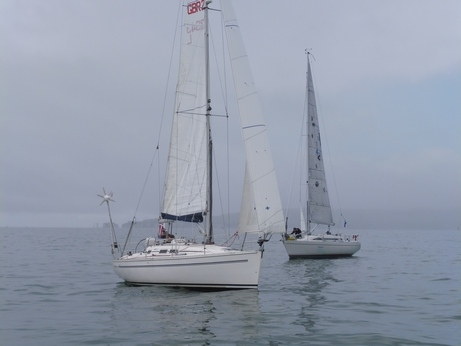 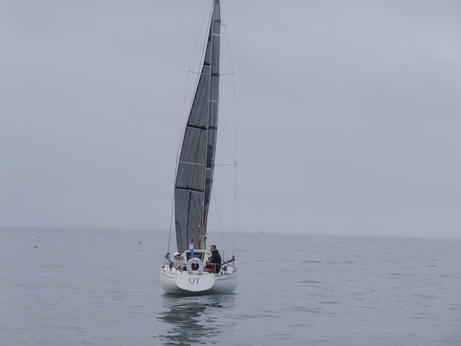 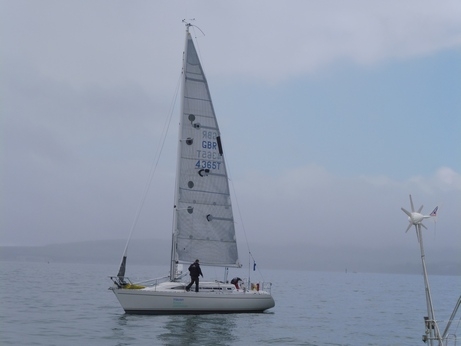 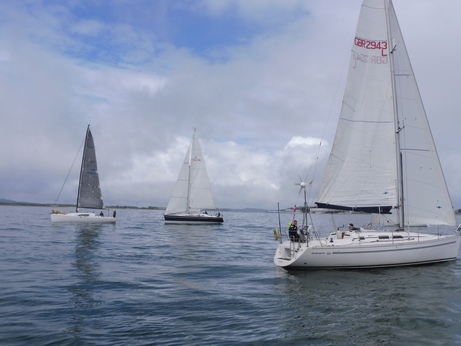 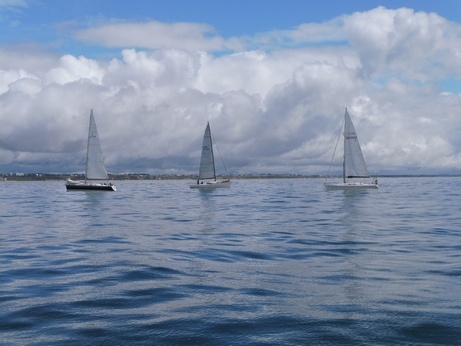 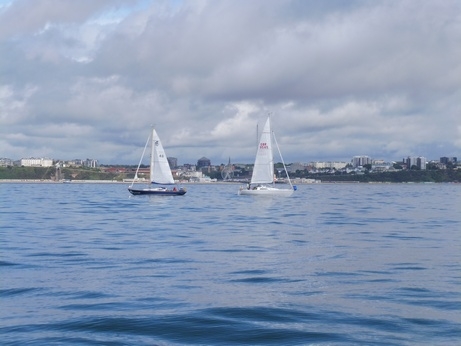 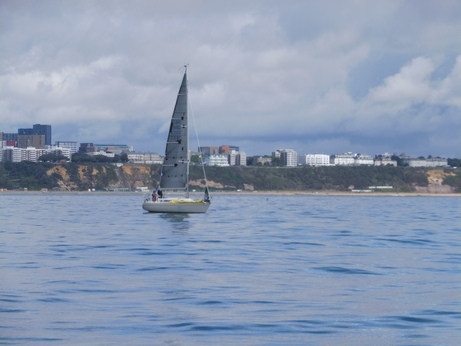 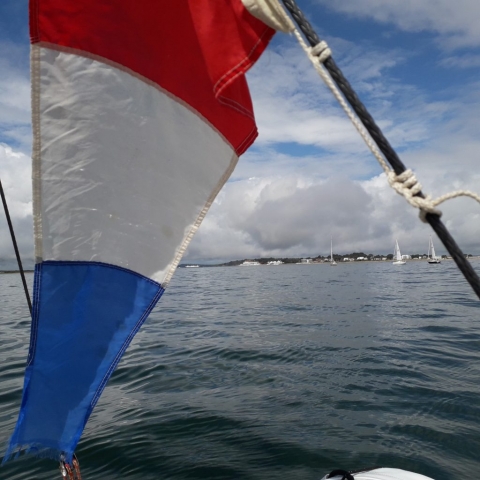 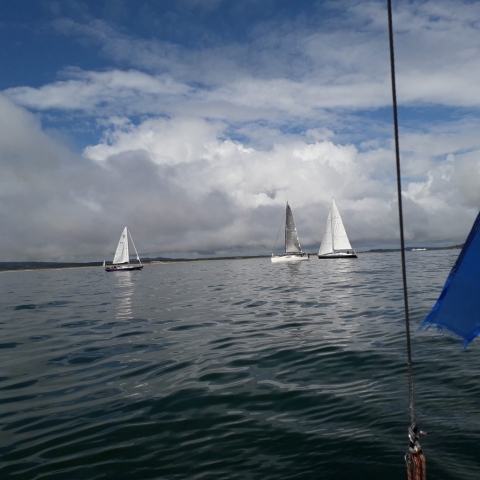 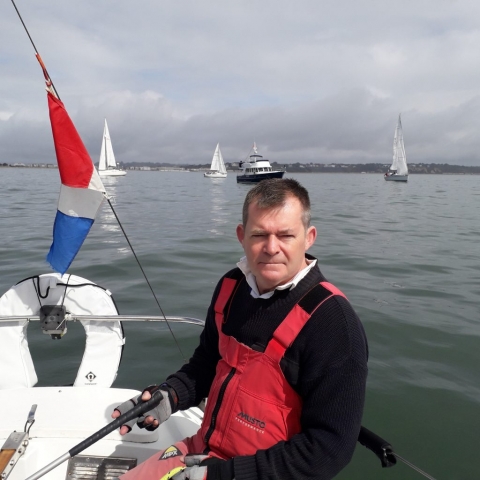